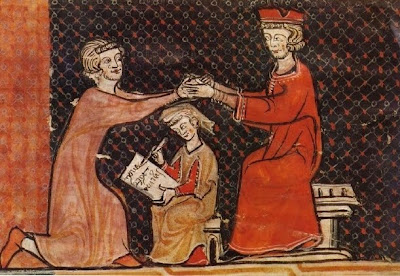 A cockroach scaled the black mud-mound, flexing its antennae at the scrofulous peasant.

With an expression of endless suffering – the doomed mien of someone in a lifelong hex – the peasant raised her boot and brought it down upon the roach with a crunch.

“Take that, you rotten insect!” she snivelled. “And that is what I will do to that wretch Haskov Haskovovich when he returns from his carousing and gambling and sinfulness!”

“I said, that is what is what I will do to Haskov when he returns from his gambling and sinfulness!”

There was a cough at the door. A bulky man with muddied cheeks entered the shack, tripping on a pile of firewood and stones arranged in a chaotic manner before the mud-mound. In his left hand was a turnip, coloured green with felt-tip pen. In his right, a Vodka bottle filled with water. He imitated a belch and waggled the bottle with a grin.

“Just look at the state of you, Haskov Haskovovich! Have you no pride, you disgusting man? Out until all hours of the night with your cheap whores, gambling our money away while I sit here, starving! Do you hear? I am starving, you filthy mongrel!”

She launched a gobbet of goo into his face and kicked him in the shin. Startled, he wiped away the goo and pretended the kick didn’t hurt. When she looked away, he grabbed his shin and gave it a rub, mouthing the words ‘bloody hell, Rillania.’

She stared into the cracked mirror, regarding the filth-strewn walls of her shack. Her very soul was clenched with pain. Her life was worth less than the roach at her feet.

“Oh, how I loathe this life! I truly am the saddest of the Russian peasants. I am also the poorest, ugliest and loneliest of Russian peasants. We are meaningless pieces of human waste. If we were to die tomorrow, no one would care. Oh, how we suffer! We are the dead!”

She waited a moment then coughed. Haskov pulled a piece of paper from his pocket.

“Yes – ” he read, “ – in this lowly shack beside the Lvov dunghill we truly are the most useless beings on Earth.”

She placed her last kopeck on the table and hmmed. There was nothing left for her to do except curl up and die. She put her head in her hands and imitated sobbing. Then, lifting the finely carved stick at her side, with its knife-sharp apex, she handed it to Haskov.

“Oh, kill me, Haskov! Put an end to this miserable life, forever! I can’t stand to be on this wretched planet a moment longer!”

He took the stick and pretended to stab her four times. She fell back onto the mound, her head rolling back but not touching the mud. She gargled saliva and closed her eyes.

“Bravo, Haskov! That was excellent!”

She leapt to her feet and hugged him.

“I truly connected with the Russian peasantry and their sorrows! Didn’t you?” she asked.

“Yes,” was the response she wanted to hear.

Rillania had yearned to experience life as a hopeless Russian peasant, and for the last hour, in her disgusting rags, in the rotten shack, she had gained an insight into the lives of the underclass. Her father Ivan was outside in the limo and honked twice. Time to go.

With a skip and a smile she returned to him, tossing her dirty overalls into the nearby field.

“Oh, it was wonderful father! I felt like a real-life peasant girl! What a beastly life these people must live,” she chirped.

“Did live, darling. The days of serfs are long gone. Russia is a Republic proud of its liberated vassals. Farmers these days are free to cultivate their land without intrusion from the state.”

“Well, anyway. Shall we go back home?”

She sank into the limo’s leathery love. The sitting distance between Rillania and her father could have been seen as a metaphor for how her parents loved her from afar, pandering to her expeditious whims instead of offering warmth and love, but this didn’t occur to her. Her father was a swell guy who owned a large portion of Murmansk. She didn’t need things like hugs and kisses when she had wealth and adventure.

Haskov the driver, recalling a shortcut from his time delivering post to Lvov, took a crafty detour up a rickety farm road. Rillania and her father sat in silence, their heads bashing against the roof as the limo potholed through lime-green fields. The road narrowed and the dirt-tracks faded, taking them along a stretch of deep grass and down a sharp hill.

Below sat a village bearing the sign ODOR. Two letters had been erased from the sign, but this abrasion turned out to be an accurate description of the town’s repellent musk.

“Driver, where are we?” Ivan asked.

“No, hold on a minute, driver. I’ve never heard of this village before. I will have a look around.”

“Oh, can I look around too, father? This is a genuine peasant village! And what were you saying about the liberated farmers?”

“Very well. But stay close to me. We are far from home.”

Haskov volunteered to lead the way, protecting Ivan and Rillania as they entered the curious village. Upon first glance, the buildings appeared to be constructed from straw, cement, grass and mud, or a composite of the four. They were lamentable attempts at DIY housing, clearly done by humans with dangerously low intellects.

“Be on guard, driver. The people who live here are obviously primitive, possibly violent.”

After a brisk potter around the ‘streets,’ it became clear there was no one to be seen for acres. Rillania cried out ‘FARM FOLK?’ a few times, hearing only the soft bounce of her echo against the stone. The further into the strange favela they walked, the more barren it became.

“Oh, this is tedious, father. Where are the grubby little peasants with names like Boggy B or Alexei, pronounced Al-eck-si?” Rillania asked.

“Hmm. What is this? This looks interesting,” Ivan said, regarding a ruinous runic structure.

They ducked their heads into its very stony interior. On the walls were etchings, unreadable in the shade, but clearly imitative of medieval engravings. As Ivan squinted to read the badly phrased Latin, and Rillania studied a curious daubing of a peasant raping an ass, the wooden door slammed violently behind them. Ivan was furious.

“Driver – do not shut the door, we cannot see!”

An oblique sound effect, like paper being torn close to the ear, was heard outside. It took them by surprise, but irritation was the most pressing emotion. The driver was irritated at being called ‘driver’ when he had a perfectly good forename. Rillania was peeved at the sudden slamming noise, having sensitive ears. And Ivan was vexed at the darkness interrupting his Latin transcription. The sound effect was roundly ignored.

The door, formerly stuck, now swung open. Gawking into the structure were a ragbag of cartoon peasants. Their shrivelled faces loomed into the entrance – a surge of palsied wretches, the likes of which Rillania could only imagine in her make-believe miseries.

“Quick! Mechi, Mechi! Look what I found!” one man, whose nose sported a prominent boil, said.

A second peasant, presumably the one named Mechi, spoke up from the crowd of hideous farm folks.

“Who are they? Thems look like they dropped from the emperor’s arse and no mistake!”

Mechi prodded Haskov with his hook-hand, while Ivan composed himself and grasped the situation.

“Excuse me. I am Ivan Irosovich – I am a wealthy landowner and businessman. My daughter and I were passing through your village and got lost. Could you please tell us where we are?”

“Ooh, he speak so royal! How much d’you think he’s worth, Mechi?”

“Nah, you look, rich man. This is our town, you listen to us! Gregor! Guard the door, would you?”

“I know where this is heading,” Haskov said.

In fact, he was wrong in his assumption. Haskov, along with Rillania and Ivan, assumed the peasants would keep them hostage for an enormous sum of money and then sacrifice them to some invented God with three heads. The truth turned out to be less beastly, though undesirable in a different way. Rillania was buzzing with excitement.

“Oh, there’s so many of the little freaks, father! Did you set this up for me? Oh, it’s perfect!”

His response was cut short when Gregor grabbed the hostages with his mutant hands and dragged them through the crowd. To their amazement, the village had been completely restored – the huts and shacks remodelled into habitable living quarters (for poor people). Mechi and his followers flocked around the well-dressed visitors in various states of incredulity. Several women oohed at Rillania’s finery, while the men prostrated themselves.

Gregor showed little sign of obeisance. He pulled Ivan and Haskov along by their arms, scooping Rillania between the two, releasing them beside a giant stage. Sheer bafflement and other modes of disbelief ran through the minds of the kidnapped.

It didn’t occur to them that the small cottage structure they had inspected was in fact a time-travelling vessel that had taken them back to 18th century Russia during the time of the tsar Alexander I. Mechi gestured to the stage, bidding the crowd to shut up.

“You perform for us. You be rich people in our play, no?”

“Perhaps this’ll convince you, no?” Mechi asked, pulling out a rather impressive knife. He behaved more like a pirate than a peasant, but Rillania was still smitten with his mannerisms.

The knife didn’t put them at an advantage. They clambered onto the stage while the few peasants whooped and hollered, hushing up after a few minutes. Rillania was so entranced at the sea of genuine serfs before her, she moved to the front of the stage.

“You beautiful peasants! Oh, you are so disgusting – it’s wonderful! How perfectly lovely it is to be here among you freaks! How charmed I am to see your grubby faces, your raggedy clothes, your ugly babies, your horrible homes, your vicious tongues and violent customs! I hope you will be hospitable to Haskov, my father and I as we visit your town. Thank you.”

The audience took a moment to process Rillania’s welcoming words. Soon, laughter erupted through the crowd, and Rillania was swept along in a humiliating gust of titters, chuckles and guffaws.

Ivan consoled his daughter with a hug.

Rillania found the peasantry vile, hideous beasts! And she was right. But then again, she had abused the Vassal Vessel.

See, when I designed the VV I intended to reunite descendants of Lords with their vassals. I was planning Genealogical Package Tours via the medium of time travel, but she misused the device.

Which was stupid. She should have consulted me first before stepping inside. And I know it was an accident, but still – I was around that afternoon, working behind a big rock. Shame they were sacrificed to the Russian God Volvoski later that day, but hey – accidents happen.