To celebrate the release of Christopher Allen’s riotously funny satirical novel Conversations With S. Teri O’Type, I have invited protagonists Curt and Teri to come share my virtual banquette.

MJ: Welcome Curt and Teri. Do you like my banquette? And could you tell me a little about your respective roles in the novel?

Teri: Fam c’est pas trop tôt! A banquette designed with the gay physique in mind. Virtual venison cookies, Batman! Ah, virtual prosecco! I adore you already, whoever you are. Love the accent. May I smoke? 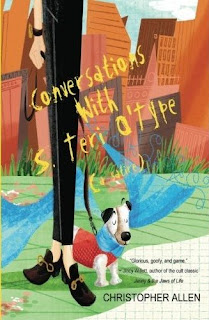 Curt: Curt Child. Pleased to meet you, MJ. I’m an accountant in New York City, but I’m originally from North Carolina. I wrote the Conversations to keep track of my progress along the Road to Greater Gayness. Teri here is my gayru.

MJ: Um, welcome. Hi Teri. Um, Curt . . . could you tell us—that is, tell me—a little about your journey on the Road to Greater Gayness? What led you to embark on such a metaphorical trip?

Teri: Well, just look at him, MJ-honey. He had no choice. One look in the mirror was enough. Does this wrinkled gray suit scream GAY? Do these flaky eyebrows scream GAY? He smells like onions and fried chicken. And take this back fat—

Teri: Curt, honey-darling. You weren’t put on this earth to breathe. You were put here to be the comic relief. Breathing is gravy. MJ—I do love abbreviated names—he really doesn’t get it, you know. Talk about a challenge. This child has more construction sites than Dubai!

MJ: Curt doesn’t need to breathe, Teri, he’s a fictional character. Now, either of you, please tell me the outcome of the Great Belt Loop Debacle.

Curt: MJ, I think I can help you with the—what you’d call it?—the Great Belt Loop Thing. I think that was lesson three. See, belt loops have come a long way since those evenly spaced loops of the 80s. Nowadays we got crazy loops happening all over pants. Double loops, triple loops, slanted loops. Gay men, because we’re trendsetters, are the first to buy pants with loops in odd places. Straight guys miss loops because they don’t expect the loop to be in a different place. Am I right, OMG? You get what I mean, MJ?

Curt: Well, what do you know. Dirnit. I missed one again.

Teri: He’s hopeless. Would you like to adopt him? I’ve brought enough food to keep him alive for a week.

MJ: Have you considered a liquorice belt? It’s both a delicious funtime suck-snack and an effective trouser holder-upper. But enough of that. (Hey Teri, between you and me, how much are you asking for Curt?)

Teri: Buy me a latte macchiato and we’re quits.

Teri: Cary-honey, you know what happens when you drink coffee.

MJ: Sold. I’d like to write Curt into my new sitcom, Two Gays & A Girl. I think it’s a highly original idea that no one has ever done before. Two gay men move into an apartment with a girl who is not gay, and hilarious adventures ensue. There may also be room for a cute pooch in there, and Charlie Sheen. What do you say? Teri, could you direct?

Teri: Cary Grant won’t work with Sheen. I’ll orchestrate . . . as long as all the actors are attached to strings like marionettes and no one is allowed to eat. Ever. Hmmm. I like—who am I kidding?—the title Two Gays & A Girl, but we’ll have to modify it slightly to Two and a Half Gays. Curt can play the half.

Teri: Bad, Cat! Bad, Cat! Cary never attacks without reason. Have you recently been to Botswana? He has a thing for Botswana. Oh, now don’t go bleeding all over us. Who’s going to pay to have this pashmina cleaned?

Curt: Dude, you’re rupturing. Maybe we should move this banquette to a hospital? Just sayin. I’ll grab the weiners.

Curt: Well, I reckon the main thing is to just be yourself. I know that’s just one tip, but I can’t think of two more.

Conversations With S. Teri O’Type is available from the UK and US and German Amazons. (And Italian and French. And Spanish. That boy gets around).
Posted by M.J. Nicholls at 07:00