In my first non-fiction book, I explore the hidden culinary talents of the 19thC poet and writer, known largely for her simple and sentimental verse.

In 1821, at the age of nineteen, Landon published her first book of poems, The Fate of Adelaide. She also revolutionised the casserole dish by introducing puce, ox blood, and hog rind to the humble stew. It was through her pioneering work in garnish development that her reputation grew, plucking the nostril hairs from goats and chopping them into manageable specks.


Serving her Goat Hair Casserole to the critic Laman Blanchard, he complimented her “magical fusion of the disgusting and the sublime” and went on to give her awful poems a positive review.

With the death of her father in 1824, Landon went into her most prodigious casserole phase, inventing ten new dishes. Among them was The Toffee Nipple which merged the shorn teats of heifers with melted chocolate and elderberries. The dish made her an international sensation, propelling her to stardom in the US. Meanwhile, she wrote and published her first novel, Romance and Reality.


My book examines this turbulent period in the young poet and culinary pioneer’s life, with contributions from Isobel Armstrong, Germaine Greer and Jeremy Clarkson.

Since the inception of Catchphrase, Roy has made it compulsory for the winner to sleep with him after every show. “Big or small, young or old, man or goat . . . send ‘em to me,” he was once caught saying on camera. It was in the contract of each winner to take a vow of silence and pleasure Mr. Walker until he was satisfied. One contestant says: “It would often take four hours, five tubs of lube, and six crew guys to get him off.”

The story of Roy Walker is an R-rated romp through the darker side of afternoon quiz shows. Available from Oct 12. 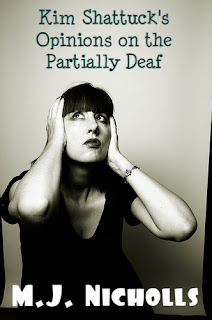 For the first time in Britain comes the US bestselling smash. The outspoken singer/guitarist from leading indie rock band The Muffs lets rip on our hard-of-hearing cousins with some outrageous thoughts.

M.J. Nicholls, author of The Fishbowls of North America, presents a series of refreshing and frank interviews that ask important questions about those with poor hearing. The book challenges all we know about partial deafness and asks that important question: is it really a disability, or are they just moaners leeching our sympathy?

The UK edition contains a bonus chapter of PC terms for the partially deaf. Among them ‘half-ears’ and ‘whatsits.’ Order now from Gulchy Turk Books, £19.99.
* 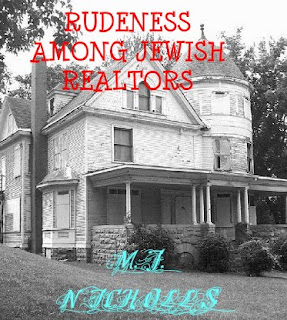 In this award-winning exposé, award-winning novelist M.J. Nicholls uncovers the truth behind the seemingly pleasant world of realtors in a Jewish enclave of Los Angeles.

Nicholls speaks to former realtors who give a frank and honest portrayal of their obnoxious and hurtful trade. “Sometimes guys would refer to their penises as their willies,” says one witness. “That kind of talk is inappropriate in a profession that thrives on decorum and friendliness. They should know better, especially on the Sabbath.”

“They shouldn’t be working or referring to their genitalia on the Sabbath,” says another witness. “The Sabbath is a holy day, not a day for walking around using horrible slang words for the penis and going to work.” Other witnesses speak of horrible acts: drinking Pepsi when speaking to clients, applying make-up when on the phone, cursing in Yiddish, and quoting long passages of the Talmud while drawing up contracts. 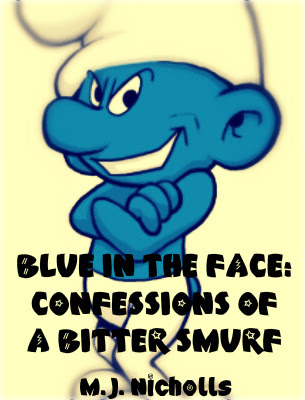 Blue in the Face: Confessions of a Bitter Smurf
Cast out from the magical land of the Smurfs, Billy Baxter has some things to say about his former colleagues. In this riveting and no-holds-barred account, Billy—formerly Sissassis Smurf—reveals how his colleagues used to fill his white hat with diseased sarsaparilla leaves, leading to nasty bug infestations in his hair. “They would seduce me to sleep with the magic flute, stick this rotting plant in my hat, then wake me up with a slap on the cheeks. It was fun at first, but soon maggots were coming out my nose. It was disgusting.”

Billy reveals how his attempts to widen the Smurf language fell on deaf ears. “I wanted to add more verbs into the lexicon, but all they wanted to say was Smurf-this, Smurf-that. It severely weakens communication to have one universal verb denoting all actions. I would ask for a glass of milk and Sassette would pull down my trousers. The animators hadn’t drawn the bottom half of my body, so I was a hovering torso for months on end.”

Billy was a talented Smurf innovator, but the other Smurfs were envious of his abilities, and suppressed his ideas. “I designed the packaging for the original berries cereal, and came up with Smurf pasta. Hefty and Clumsy couldn’t take being outdone and locked me in a shoe for three years. By the time they let me out they had become millionaires—for their brilliant cereal packaging and Smurf pasta. I was furious, and hungry.”

Learn how the Smurf BBB burnt down the Green Smurf village in a frenzy of racial hatred. How Lazy and Dreamy are ruthless capitalists, exploiting young Smurfs for cheap labour. How the original Smurfs, the Schtroumpf, were put into concentration camps and exterminated. How the flute with six holes is a standard flute with perforations. How Smurfs are adept at business English and political rhetoric, and often sell arms to Kuwait. All this and more in a shocking exposé of a deadly cartoon fear regime.