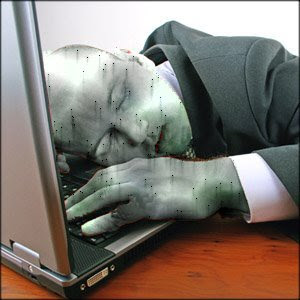 Ever get that complex where you have to finish the previous thing before starting the next thing? Where all attempts at starting the next thing are futile until the previous thing is deemed complete in your mind? I have that complex now. I’m waiting for people with inboxes the size of Gibraltar to respond to my requests, so I can quote them in a very enlightening chapter of my WiP.

Why do people allow their inboxes to balloon up? If you’re a mover and shaker, delegate the task of emptying the engorged daily inbox to a minion. Seriously. It used to be you phoned to speak to PersonsWithPower to be told to get lost and never phone again. Or, perhaps, they’d respond if they were ‘generous’ enough to squeeze you in. Now you can send emails to forty different PersonsWithPower and get no responses. The email has become the number one snubbing device. At least the phone was a personal get-stuffed-weirdo. Months of silence is more offensive than being told to shove it, as you don’t know where you stand.

PersonsWithPower use the ‘far too many emails’ defence too often. Put a limit on who receives your email address. Give an email that can be monitored by a minion who chooses which emails you receive, and who writes back to people. Don’t pull the apologetic face because you’ve been whoring your email address around like a self-serving pimp. I expect courteous responses to all correspondences, or at least auto-responses giving me a timeframe for when the PersonsWithPower will respond.

Imagine phoning someone and listening to the dialling tone for months on end. It’s the same.

In terms of email or message response etiquette, if I’ve asked a question, that means I require an answer. Too many people are flaky on the email front with dribbled out replies and slow response times. Not responding sends out two signals: a) you are so bored of this exchange, you really couldn’t be arsed continuing and so left the response, or b) you are a lazy and self-serving person too busy watching The Bill to engage with another human being.

Now, I sympathise with this, being a proper people-hater (most people who profess to hate people are smiley happy partygoers with hundreds of friends—I’m the real deal, dammit). But it’s really not hard to round off emails with little ‘thank you’ or ‘speak later’ replies. You wouldn’t end a phone call without saying goodbye, unless you’re in every movie ever made. You wouldn’t suddenly walk off halfway through a conversation.

Email observes its own rules, but the rules are bogus. From now on, I want proper exchanges with depth and meaning. I want information typed in proper sentences, not wispy lowercase. And I want speedy, pleasant responses to all requests. Too much to ask? Never.