A Note to All Those Who Laptop in Public 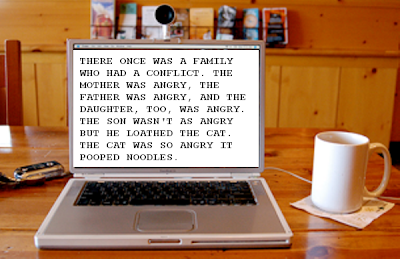 Listen: it’s not easy carting a laptop around town. Trudging through the marble streets of Auld Reekie (where the rain is made from liquid gold) and finding a café without four packs of student humbuggers discussing the latest developments in the heady world of sleeping on Dave’s sofa after a night of top-notch revelry and world-class devilry. Then you have to find a plug (unless you have a wireless one—how modern!), hook it in and whomp it on.

Then there’s that thing you do—we’ve seen, we see, we have seen!—where you angle your screen so we can SEE YOUR GREAT WORDS, words you type in large font and CAPS, SO WE CAN SEE YOUR AWESOMENESS! It may well be you are Joyce Carol Oates on your 198th novel about families and the conflicts between them and don’t-families-have-conflicts and think-deeper-think-of-the-deepness-of-conflicts, but WE DON’T CARE!

If we’re writers, we hate you because you are leaking your product prematurely to the masses. You are selling your wares as you write your wares, and no one wants to read wares that haven’t undergone four drafts of ware-correction and what’s-it-for ware-agonising sessions and other ware problems that characterise the writer’s wareisome life.

Having said that, I am writing this in public. Behind me, four envious writers are scribbling down these words to incorporate into their novels. I can hear one fainting from the refreshing originality of the family conflict idea, and another is planning a post about annoying twats who write on their laptops in public. One person loves the wareisome pun.