I met writer, singer, traveller, blogger, and Munich’s foremost Henry James scholar Christopher Allen in a bowling alley for lunch. After a hard hour’s work tutoring turtles in Latin verbs, he likes to relax in the dark staring at pins, breathing into the night. It’s not creepy, he insists, it’s mellow. I lie down on the alley while he rolls a few balls around me. It isn’t lunchtime, exactly, more the middle of the night, but we don’t say anything.

Thanks for agreeing to this interview. Please don’t hurt my beautiful face. So: can you tell me a bit about your latest novel?

I can do better than that. I can recite it from memory while juggling bowling balls. But I won’t. I might, however, consider giving you a synopsis for, say, twenty quid? Good, here goes:

Linda, an incredibly gifted yet awful writer, has always got away with words. In Linda Wright’s Dairy we follow the daily diary entries of a woman realizing that her life is nothing like she thought it was. As she hilariously struggles to come to terms with the loss of her father and then the loss of her husband, we can’t help but slap our knees black and blue at Linda’s way with words. It’s over-the-top, hysterically funny of course—and sad. Moo.

Wow, that was interesting. You also write travel pieces at the blog I Must Be Off, endorsed by both Prince Harry and the Queen. Tell me an amusing anecdote occurring in the Bavarian region. No swearing please.

I am so grateful for both Prince Harry’s endorsement and, yes, the Queen’s, but Harry’s especially. Something about redheads endorsing me makes me tingly. An amusing anecdote in Bavaria . . . involving me, you say? There was the crazy man singing an aria at the Hauptbahnhof who once threatened to kill me. Not amusing enough? Really? It involved the police. No? OK, I have one.

Once upon a time, a dashing and dapper young American was the interim pedagogical director in a large language institute in Munich. It goes without saying that this youthful, incredibly adorable Yank was disliked intensely by everyone except one of the Greek teachers who stalked him in bus stations.

One sunny day in June, the young American—we’ll call him Christofer Alan—trotted into the teachers’ lounge with a colleague—an attractive young woman named Natalie who taught both Portuguese and German. In her beautifully tanned hands, Natalie was holding The Autobiography of Doris Lessing. As she entered the room, she turned to Christofer Alan and asked, “Have you read this?” A dreadful question, no?

“What would you expect from an American?” The heavily French-accented voice had come from an elderly instructor named Madam Schüller. She said “American” as if it were a naughty word like “DanBrownfan.”

“Ist es nicht so?” Madam Schüller went on, speaking to Natalie in German because she did not expect the stupid, illiterate American to understand the simplest German.

To make a long, amusing anecdote short, Christofer Alan returned to his thesis director later that year—a woman who’d written books on James, Woolf and Lessing for Doris’s sake!—and chewed off her arm for not introducing him to Lessing. So funny. So funny. Oh me.

Hahahahahaha. Most chucklesome! Now, I’ve noticed your adorable six-pack. Watch the ball! Ouch, that got my ear! So, erm . . . what advice would you give to teenage boys who want bods like Norse Gods?

Look, first of all, your head is lying right between the two forward arrows. Don’t you know anything about bowling? Obviously no redneck in you at all, boy. If you’ll move an inch to your right, you’ll have a bang-up chance of surviving this interview.

Now where were we? Oh yeah. A teenager who wants a bod like a Norse God needs to become a Norse God. It’s not that difficult. If I did it, anyone can do it. Teenagers are such silly, lazy things. For my how-to pamphlet How to Be Norse and Godly, send €39.99 to my PayPal account at challen@gmx.de. Delivery not guaranteed. 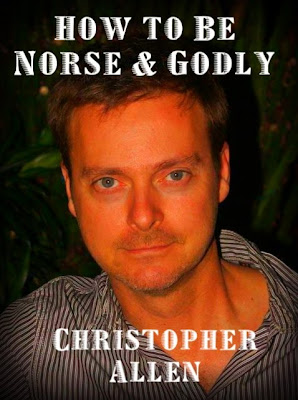 Please tell everyone the proper way to use a semicolon. (Dull, yes, but a necessary question. For me).

Yay! The MEAT of the interview. The semicolon and I are such good friends. I would never use him, per se; I might, however, employ him. In the previous sentence—meaning the one directly preceding the present one—Christopher Allen has employed the semicolon for €50 an hour. You can as well! The semicolon will work for you under the following conditions:

A word about semicolon usage: Some writers go hogwild with the semicolon without regard to its job description. How would you feel if you were hired to do one thing and then ended up doing the job of an em dash or, worse, a comma? This flagrant abuse of the semicolon has led to publishers and editors banning it from the workplace altogether, which is sad. Employ the little guy correctly and pay him a decent day’s wage. We’ll all be happier.

Strike! Well done! Next time, could you maybe not bounce the ball off my nose first? Thanks. Now. What would you do if a cow turned up at your home, begging for a bowl of custard?

Custard has always confused me. I have to think long and hard to even remember what it is. It’s a dairy product, isn’t it? Hmmm. Well, is the cow a young cow? No. Then I would counsel the poor bovine. Sounds like a mother/breast fixation to me. What on earth does she want with custard now, well past the years of gently nudging her mother’s teat for milk? After a long talk—she’ll do most of the talking I’m sure; I’m a great listener—I’ll encourage her to graze on my lawn. It needs cutting anyway.

I see. Well, that’s nice to know. Now, you often write overtly homophobic stories full of horrifying anti-gay sentiments.* I don’t mind that, but you also criticise pigeons. Why our feathered friends? Why?

Oh, yeah. Those gays. Don’t get me started. But pigeons! At least the gays know how to use a toilet. Have you ever been to Piazza St. Marco in Venice? A pigeon toilet. That’s all it is. Thank goodness Venice floods with sewage once a week. At least one kind of excrement is washed off the piazzas. Pigeons are not your friend. Along the Thames Path in London, there is a stretch where the ground is almost solid white from pigeon poop. Not even the gays would do this.

Now, you have gone on record as saying your 1998 novel, Christopher Allen is the Cutest Tennessean in Munich is not autobiographical. Any further comment on that?

During the time I wrote this groundbreaking work of genius (1997-1998) I actually lived in London. So there ya go.

Actually the title of that memoir was Anyone Who F**** With Christopher Allen Will Get in Bed, Baby. I’m shocked actually by your response. This novel was not meant to be humorous. I just think the bed is the most comfortable place to show affection. Do I tell knock-knock jokes occasionally to keep my partner awake? I might.

Christopher Allen travels obsessively and often comes away from these travels with a few cuts and bruises. Before he hugs you, you’ll probably want to know where his hands have been. Christopher Allen blogs at www.imustbeoff.blogspot.com.